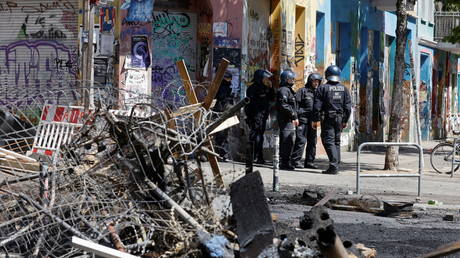 A routine fire inspection has led to massive riots in the German capital as left-wing radicals protested a fire inspector’s visit to a Berlin squat. At least 60 police officers have been injured in the violent confrontation.

Barricades have been burning on the streets of Berlin’s Friedrichshain neighborhood on Wednesday. Squatters, left-wing radicals and their sympathizers erected them from rubbish, bicycles and barbed wire to block the authorities from accessing a house on one of the local streets.

Known as one of the most popular get-together locations among German left-wing radicals, the ill-fated house on the Rigaer Strasse had been occupied by squatters for a year until they were evicted in a massive police operation back in 2016. Since that time, however, it has been apparently occupied again.

Its residents, some of them without rental agreements, have recently even filed a complaint with a local court, challenging the decision of the building’s owner and the local authorities to send a fire inspector into the house. The complaint was rejected by the court which cited a public interest in mitigating the potential risks of fire in the building.

The squatters and the radicals were apparently not ready to give up so easily. Some started pelting the police with bottles and stones as law enforcement officers sought to breach the barricades.

The situation escalated further and the area started to look like an active combat zone. A helicopter was barraging amid the billows of black smoke clouding the skies. Some witnesses reported dozens of loud bangs.

Footage published by the Ruptly video news agency showed the police trying to break one of the barricades with an armored vehicle and using water cannons to extinguish the flames. Berlin’s “emergency services and fire fighters were not let through,” the police said in a statement on Twitter, adding that they were pelted with stones, including from the roofs of nearby buildings.

At least 60 police officers were injured in clashes, mostly by stones and bottles thrown by the rioters, a police spokeswoman, Anja Dierschke, told the Berliner Zeitung. The police also said that around 200 masked rioters clashed with police before retreating to nearby houses. Only one person has been arrested so far. A police team also managed to climb on the roof of the Rigaer Strasse house.

Berlin’s Interior Minister Andreas Geisel has canceled his participation in a conference of interior ministers on Wednesday because of the riots. “Those who burn car tires are not fighting for left-wing open spaces, but are harassing their own neighborhood,” he said.

The riots also drew condemnation from German politicians. Burkard Dregger, the head of the conservative Christian Democratic Union faction in Berlin’s parliament, accused the local ruling left-wing coalition of pandering to the “chaos” and “violence” of the leftist radicals.

“They created the breeding ground for…violence that Berliners have suffered from for years,” he said.

Karsten Woldeit, a member of the right-wing Alternative for Germany (AfD) party, called on the police to immediately and “decisively” confront those he called “leftist terrorists.” The “hotbeds of violence” should be cleared immediately, he said.

The squatters previously announced violent resistance to the fire inspection of the house which is scheduled for early Thursday morning. Earlier, the district authorities ordered the owner to conduct the inspection or pay a fine of €500,000 ($605,650).

Police have cordoned off nearby areas and announced that access to the district would be granted only to its residents between Wednesday and Friday evening. Law enforcement are preparing for a “major operation,” according to the local media.