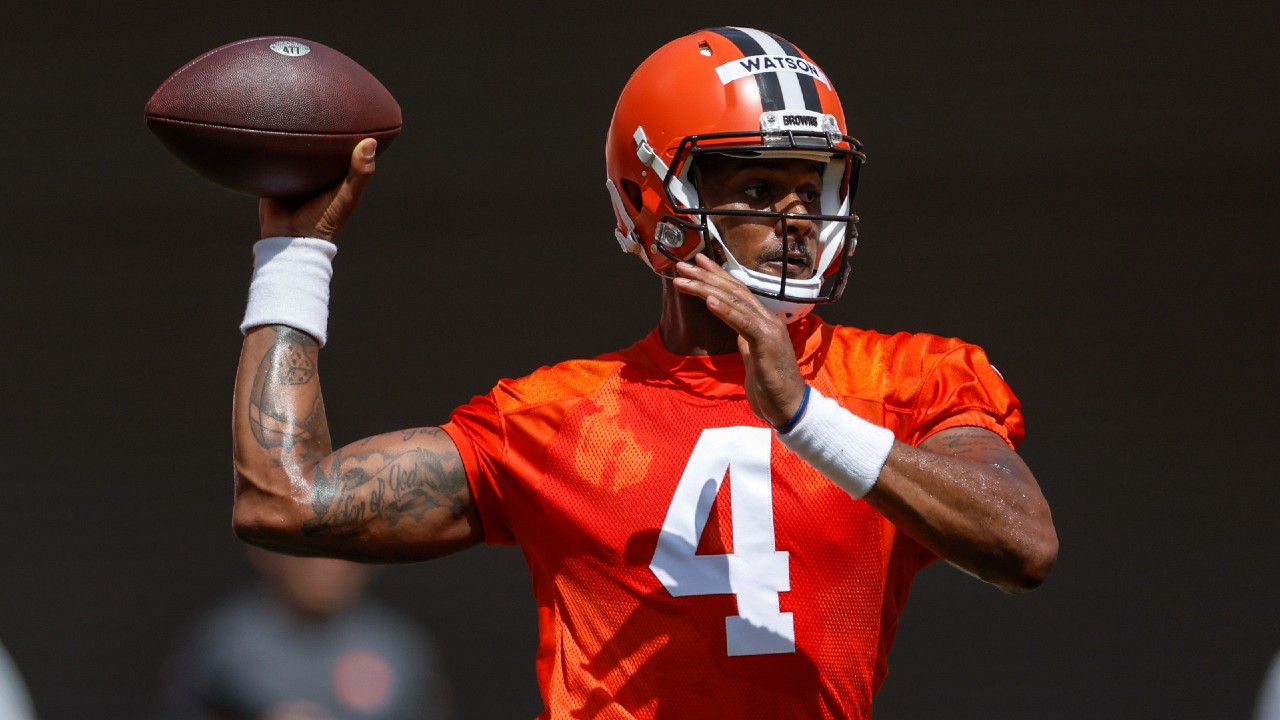 Editor’s Note: The following story deals with sexual assault, and may be distressing for some readers.

If you or someone you know is in need of support, those in Canada can find province-specific centres, crisis lines and services here. For readers in America, a list of resources and references for survivors and their loved ones can be found here.

The league had sought to ban Watson for at least one year for violating its personal conduct policy. He was accused of sexually harassing and coercing the women during massage therapy sessions while he played for the Houston Texans.

Watson signed a $230 million fully guaranteed contract after being traded to the Browns in March. The three-time Pro Bowler will lose $632,500 in salary this season while serving the suspension, which takes effect Aug. 30.

The settlement ends months of speculation and headed off a ruling from former New Jersey attorney general Peter C. Harvey, who was appointed by Commissioner Roger Goodell after the league appealed a six-game suspension issued by disciplinary officer Sue L. Robinson.

As part of the settlement between the league and the NFL Players Association, Watson will have to be evaluated by behavioural experts and follow their treatment program, the NFL said.

Watson, who recently apologized for the first time since the allegations surfaced, spoke to reporters after the settlement was announced. He offered more contrition while maintaining he never has been inappropriate with women.

“I’ve always stood on my innocence and always said that I’ve never assaulted anyone or disrespected anyone and I’m continuing to stand on that,” he said. “But at the same time, I have to continue to push forward with my life and my career, and for us to be able to move forward, I have to be able to take steps and put pride to the side.

“I’m going to continue to stand on my innocence and keep pushing forward, and I’ve always stood on not disrespecting or sexually assaulting anyone.”

As part of the settlement, Watson may return for the Browns’ game on Dec. 4 in Houston. He won’t be allowed at the team’s facility during the suspension and will be eligible for reinstatement on Nov. 28.

Browns coach Kevin Stefanski said Watson will not play in any of Cleveland’s preseason games.

Along with his $5 million fine, the league and Browns are donating $1 million each to a fund that will support nonprofit organizations across the country to educate young people on “healthy relationships, promote education and prevention of sexual misconduct and assault, support survivors, and related causes.”

Browns owners Dee and Jimmy Haslam, who have been widely criticized for trading for Watson, stood by the QB. They said they expect him to learn and grow from the experience.

“Since Deshaun came into our building in April, he has done everything we have asked of him and more,” Jimmy Haslam said at a news briefing with his wife and Browns general manager Andrew Berry. “And he has been the person, the leader that we expect him to be and I think he understands where he is in his life, it’s a pivotal point, and we as an organization are going to do everything we can to help him not only be the best football player he can be but more important to be the best person he can be.”

Haslam was asked if he’s still comfortable with Watson being on Cleveland’s roster.

On Aug. 1, Watson was suspended six games by Robinson, a former federal judge jointly appointed by the league and union to act as an independent disciplinary officer. She found the 26-year-old violated the league’s conduct policy and called his behaviour “egregious” and “predatory.”

Believing the suspension was too light, the league appealed and pushed Watson’s case back to Goodell, who had handled all player discipline in the past. The league previously pushed for an indefinite suspension and hefty fine.

At the owners’ meetings this month, Goodell said the league’s pursuit of a yearlong ban was warranted following its investigation and Robinson’s findings.

“She reinforced the evidence,” Goodell said. “There were multiple violations that were egregious, and it was predatory behaviour.”

In her conclusion, Robinson cited Watson’s lack of remorse as a factor in her decision. Watson apologized for the first time “to all the women that I have impacted” before making his Browns’ debut Friday in an exhibition in Jacksonville.

Watson was accused of being sexually inappropriate with the women during massage therapy sessions from March 2020 to March 2021 in Texas. In civil lawsuits filed in Texas, the women accused Watson of exposing himself, touching them with his penis or kissing them against their will. One woman alleged Watson forced her to perform oral sex.

For now, the suspension ends months of speculation about whether Watson would play in 2022 for the Browns, who outbid several other teams, traded three first-round draft picks to the Texans in March and signed the QB to a five-year contract.

Watson’s case sparked strong opinions while raising questions about the league’s handling of player discipline and its spotty record of supporting women.

The Browns believe Watson could make them a Super Bowl contender. Without him, they could struggle to simply contend in the AFC North against defending conference champion Cincinnati along with Baltimore and Pittsburgh.

All along, the Browns’ plan was to turn their offence over to veteran Jacoby Brissett, who has made 37 career starts, during Watson’s suspension. But it’s now possible Cleveland will explore other options at quarterback.

The suspension also means Watson will be idle longer. One of pro football’s elite QBs, he sat out last season in Houston after demanding a trade and before the sexual allegations surfaced.

In her 16-page ruling, Robinson found that the league proved its case that Watson violated three provisions of the conduct policy: sexual assault as defined by the league, posing a genuine danger to the safety and well-being of another and undermining or putting the league’s integrity at risk.

Attorney Tony Buzbee, who represents all 24 women who sued Watson, was critical of the NFL’s handling of the case and settlement.

“By settling this matter the way he has, Roger Goodell has proven one of two things: Either his recent rhetoric was utter baloney, or his bark is much worse than his bite,” Buzbee said in a statement. “My belief is that he is nothing more than a paper tiger.

“The message today to all victims is clear, if you believe you have been sexually assaulted by a powerful person, keep your mouth shut and go away. The NFL has certainly demonstrated that its ownership and the organization doesn’t care.”