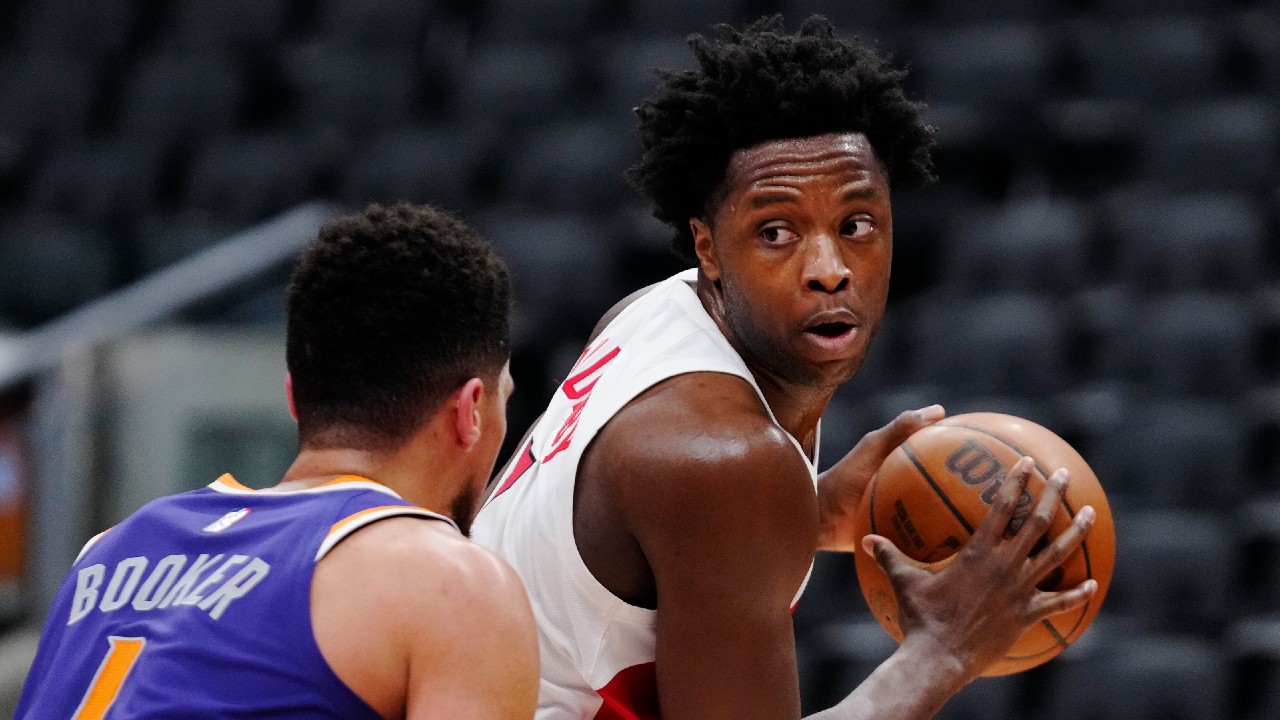 The most telling indicator of the Toronto Raptors‘ intentions as the NBA Draft approached was offered well before they made Arizona big man Christian Koloko their second-round pick.

Leading up to the draft there had been persistent rumours or speculation that Raptors forward OG Anunoby was in play and trading him was the means by which Toronto would obtain a pick in the lottery while adding some additional roster depth, presumably, and that the fifth-year forward would find a path towards becoming a primary offensive option and potentially increase his contract value in the process.

It didn’t matter that most of that speculation was being driven by the teams looking to add the skills that make Anunoby so valuable to Toronto: size, quickness, defensive versatility, quality three-point shooting and the possibility of more offensive punch to come.

In particular, the Portland Trail Blazers were pushing hard to convince the Raptors to give up Anunoby in exchange for the seventh pick in the draft, the full-court press being made on Wednesday, per sources.

But on Thursday morning the Raptors’ answer was being played out in real-time at the OVO Athletic Centre as Anunoby was working out with rookie-of-the-year Scottie Barnes and all-NBA forward Pascal Siakam. In theory it was concerns about not having enough opportunity to flourish behind Siakam and Barnes that was behind reports that Anunoby was unhappy in his role in Toronto and could be open to a change of scenery.

But none of that was on display Thursday.

It wasn’t a coincidence that three of the Raptors’ most important players were on the floor together, training. If finding ways for them to thrive individually and as a group is part of the plan, working out together is one small plank in it.

“I think that there has appeared to me this summer, not only today but a lot of these weeks here since we’ve broken up there’s a pretty good closeness with this group,” said Raptors head coach Nick Nurse. “[Thursday] we have Pascal and OG and Scottie all on the floor today working out with each other at the same time and that was exciting to kind of watch them kind of go at it a little bit… but mostly it’s just our guys, rightly so, they’re proud to be Raptors, they love the organization… so team spirit feels really good right now. So it’s exciting to see.”

Needless to say as the lottery ticked along and as the Trail Blazers pick came and went at No. 7, the Raptors stood pat, and Anunoby remained on the roster. Any concerns he may have about his role or concerns the Raptors might have about him are yesterday’s news.

“I had a really good positive season-ending wrap-up with OG,” said Nurse. “We certainly talked about all those kinds of things. Listen, I think OG is really good. I really like him. He is a tremendous person and a great two-way player. He had a little bit of a rocky road last year obviously with the injuries [that kept him out of 34 games last season]. I think more than anything, he just wants to be out there… be available more games, and I think that his production and his promise and his continued development hinges on that. Right? I think he knows it. [And] I think we all know that. But guys like him are hard to find in this league.”

When the Raptors did get a chance to make a selection? It didn’t come until the second round — the Raptors having traded their first-round pick in the deal that brought them Thaddeus Young at the trade deadline.

Picking 33rd, Toronto chose Koloko, a junior out of Arizona who is notable because at seven-foot-one he becomes the only player on the roster taller than six-foot-nine and because he comes from Douala, Cameroon, Siakam’s hometown.

Koloko averaged 12.6 points, 7.3 rebounds and 2.8 blocked shots while shooting 63.5 per cent from the floor in 25.4 minutes a game. He was the defensive player of the year in the PAC-12 and won the most improved player award too as he made jumps in every statistical category from his sophomore season after playing sparingly as a freshman.

The Raptors have been tracking him since a Basketball Without Borders camp in 2017 when the now 22-year-old was a “long, skinny, lanky kid,” said Webster. “You want to continue to see that climb and everyone knows our development [plans]and the amount of resources we want to put into a guy like him, you know, the sky’s the limit.”

Nurse said that while having a seven-footer on the roster may be a departure for a team that has emphasized position-less basketball, the possibility of a big man who can be active defensively can help his club play even more aggressively on the perimeter.

“If he protects the rim as well as I think he does, I think that always gives you a chance, if it’s possible, to be even more aggressive out on the wings,” said Nurse. “[To] funnel things in and be even more in lanes and more handsy and more turnover-driven and not have to pay for it if you gamble and make some mistakes. Maybe you can have someone save some of those mistakes at the goal.”

Four Canadians selected in NBA Draft, including two in top 10

NBA Trades Roundup: Recapping all the transactions from draft night

It was a great night for Canadian basketball as well. For the first time in NBA history a pair of them went in the top seven and in all four players were taken in the top-32.

Bennedict Mathurin, an all-American at Arizona went sixth overall to Indiana, becoming the first Montreal-based player to be taken in the lottery. With the next selection — No. 7 — the Portland Trail Blazers took Shaedon Sharpe, the explosive wing from London, Ont. Andrew Nembhard of Aurora, Ont., a point guard out of Gonzaga, went 31st to Indiana and Caleb Houstan of Mississauga, Ont., went 32nd to the Orlando Magic.

It was another positive for Nurse, who doubles as the Canadian men’s senior national team head coach.

“Another great night really for Canada, and basketball in the country,” said Nurse. “And congratulations to not only all those guys and their families but all the coaches and stuff that helped get those guys there.”