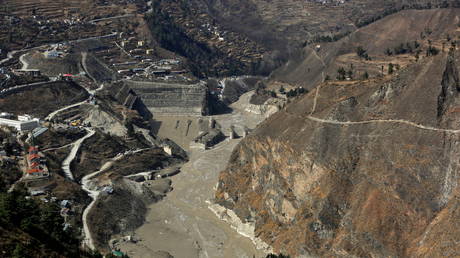 Scientists studying the cause of a flood which killed more than 200 people in the Indian Himalayas have said the disaster was caused by a massive rock and ice avalanche that could happen again in the mountain range.

In a study published in the journal Science on Thursday, scientists from the University of Zurich (UZH), the WSL and ETH Zurich warned that a disastrous event, like that which killed more than 200 people along India’s Dhauliganga river valley in February, could occur again.

Using satellite imagery, digital models of the terrain, seismic data and video footage, the scientists were able to reconstruct the events of February 7, when a devastating flood ravaged the Chamoli district, sweeping dams, houses and people along with it.

The study says that a cascade of deadly events, including a flood, was generated by “a massive rock and ice avalanche from the 6063-meter high Ronti Peak.” The rock and ice which detached from the peak then fell about 1,800 meters before colliding with a rivulet, setting off a deadly chain of events.

The analysis suggests that a whopping 27 million cubic meters of rock and ice fell from the steep north face. An animation shows how the events unfolded.

After hitting the rivulet, the giant mass of rock and ice quickly transformed into a highly mobile debris flow that destroyed two hydropower plants and left more than 200 people dead or missing. The scientists add that the rock-to-ice ratio was “exactly the critical value required” for the ice to nearly completely melt into water.

Their evidence dismisses an earlier assumption that a well-known high mountain phenomenon, called a glacial lake outburst flood – when dammed water spills over – was the culprit.

The study suggests that similar events could occur across the mountain range and urges relevant authorities to increase their monitoring capabilities. Holger Frey from the UZH’s Department of Geography stated that “it’s only a matter of time before the next such massive event will happen somewhere in the Himalayas.”

The scientists added that increased monitoring could help reduce post-disaster analysis to days or even hours, instead of four months.