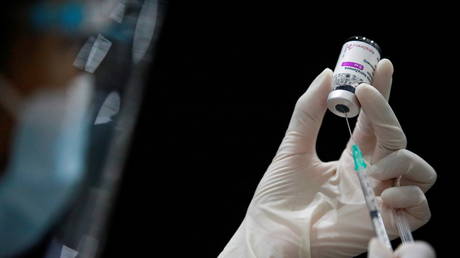 Thailand has been retaining locally manufactured AstraZeneca vaccines for itself in the midst of a massive wave of coronavirus, Taiwan’s president has said, claiming that shots scheduled for delivery in June did not arrive.

Tsai Ing-wen bemoaned the sub-par deliveries from Thailand on Friday in an interview with a local radio station. Taiwan is claimed by China as an integral part of the country.

“The problem is that the goods that were supposed to have arrived in June have not,” Tsai stated. “Now Thailand’s epidemic situation is serious and they are giving priority for vaccines to be used in Thailand.”

The president’s assessment of the delays in the delivery of AstraZeneca shots turned out to be quite different from statements made by other top Taiwanese officials earlier this week. On Tuesday, the island’s Health Minister Chen Shih-chun blamed the disruption on technical issues and manufacturing problems in Thailand, telling lawmakers that the ordered shots would be delayed by at least a month.

So far, neither British-Swedish drug maker AstraZeneca nor Thailand officials have reacted to Tsai’s allegations. AstraZeneca and US-made Moderna shots remain the only two vaccines approved for use in Taiwan, despite repeated calls from the mainland to allow Chinese-made shots onto the island.

The call was reiterated by China’s Taiwan Affairs Office earlier in the day, with Beijing also calling for Taiwanese people to come to the mainland and get vaccinated.

“[We] urge the authorities to earnestly listen to the voices of the people on the island and remove the man-made obstacles for mainland vaccines to enter Taiwan as soon as possible, so that Taiwan compatriots can get safe and effective mainland vaccines,” the office said.

Both Thailand and Taiwan have recently faced major spikes in coronavirus cases. Thailand has registered 190,000 cases since the beginning of the pandemic, with more than 80% of the cases recorded since April. More than 1,400 people have succumbed to the disease across the country.

Until recently, Taiwan had managed to keep the coronavirus situation well under control, registering only around 1,000 cases in over a year. The situation changed in recent weeks, with the country’s tally having passed the 12,000 mark, and more than 360 people dying since mid-April.

LordOfDailytimes
Previous ArticleUSWNT stretch unbeaten run to 40 games after win over Portugal
Next Article Devastating flood that killed 200+ in India caused by massive avalanche and could happen again, say scientists