HomePolitics
By LordOfDailytimes on November 27, 2022 Politics 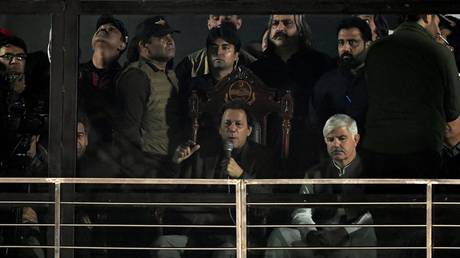 Imran Khan cited fears of nationwide havoc, in his first public appearance after an assassination attempt earlier this month

Former Pakistani Prime Minister Imran Khan, who was ousted after losing a no-confidence vote in April, has announced his decision to call off a protest march for fear of further destabilizing the situation in the country. It was his first public appearance since he was wounded in an assassination attempt earlier this month.

Addressing supporters in the city of Rawalpindi on Saturday, the former prime minister said: “I have decided not to go to Islamabad because I know there will be havoc and the loss will be to the country.”

Khan was using a walking frame and spoke from behind bulletproof glass. He told his supporters that multiple security sources had warned him that his life was still at risk.

Local Geo TV, citing a police official, reported that as many as 10,000 security personnel had been deployed to provide security at Khan’s event, including snipers.

Since early April, when he was deposed from office, Khan has held mass protests across the country, which were meant to lead up to a massive march to Islamabad. He describes his removal from power as illegal and is seeking to mount a political comeback.

It was during one of these rallies in early November that a gunman opened fire on the former prime minister, who sustained an injury to his shin.

Khan was quick to blame the assassination attempt, which took place outside the town of Gujranwala in the east of the country, on current PM Shehbaz Sharif – which he vehemently denied.

So far, one person has been arrested in connection with the attack. The suspect insists he acted alone.

During his time in office, from 2018 to April 2022, Khan deepened economic and diplomatic ties with Russia and China. He claims that his ouster was orchestrated by the US with the goal of installing a more compliant leader.

In October, Pakistan’s Election Commission barred Khan from holding public office for five years, accusing him of failing to properly report gifts he had allegedly received during his time in power. The former PM says the decision was politically motivated.