HomePolitics
By LordOfDailytimes on August 16, 2021 Politics 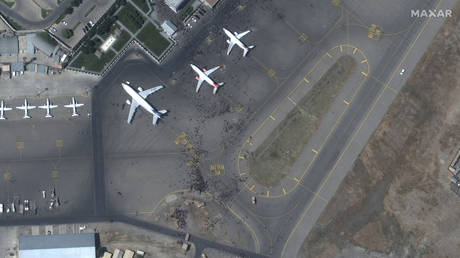 High-quality satellite images have captured the ongoing Kabul airport debacle, showing droves of Afghans on the runway, attempting to leave aboard Western evacuation flights after the country fell to the Taliban.

The images, released by US-based Maxar Technologies on Monday, revealed scenes taken from above the airport after the Afghan capital was seized by the militants.

A massive traffic jam can be witnessed outside the facility, as well as scores of people roaming the tarmac. Armored vehicles can be seen next to the runway, although nothing resembling a security cordon is visible.

The chaotic evacuation from the airport has already resulted in at least seven deaths, according to the Associated Press, citing US officials. Hundreds of Afghans have been making their way there in a desperate attempt to board a fight and flee the Taliban takeover.

Disturbing videos circulating online purport to show multiple Afghans clinging onto the exterior of US military transport planes and then tragically plunging to their deaths shortly after takeoff.

As footage of the unruly scenes at the airport emerged, the Pentagon suspended its evacuation process, citing “an abundance of caution.” The US Army and other international troops were working to secure the runway so flights could resume, a US military spokesperson said.

LordOfDailytimes
Previous ArticleYou have to acknowledge the Taliban is the new ‘governing entity’ of Afghanistan, former US diplomat tells RT
Next Article Kendall, Bella and Hailey All Love This Controversial Trend—And I Do Too