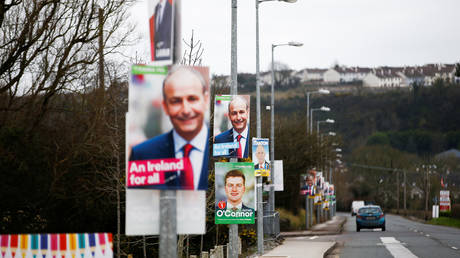 Four of Ireland’s biggest political parties, including the three currently in power, are facing audits after admitting to using fictional market research companies and posing as pollsters to survey voter mood ahead of elections.

The Irish Data Protection Commissioner (DPC) is conducting an investigation into how Fianna Fáil, Fine Gael and the Green Party, as well as opposition party Sinn Féin, have handled private data collected from voting members of the public.

In a statement, the DPC said that “all political parties have been asked to account for the source of each field of personal data they process concerning electors/voters.”

Earlier this week, news emerged that Sinn Féin party members had worn fake identification badges and pretended to be pollsters to survey unsuspecting households prior to, and during, elections.

Citing a leaked 2015 internal party document, the Irish Independent paper reported that party members were instructed on how to pass as employees of a fake polling firm called ‘Irish Market Research Agency’ so as to ascertain voting intentions ahead of the country’s 2016 general election.

The party’s representatives defended the practise, noting that it was “entirely anonymous” with “no identifiable private information or data… used, collected or stored.”

Spokesman Eoin Ó Broin suggested that such activities were “standard practice” at election time. He claimed it was a “key way to level the playing field” in light of the expenses involved in polling.

“The accuracy of those polls was just as good as polls that you would pay thousands of euros for and we stand over that. The polls were done properly and ethically in my view,” Ó Broin told Newstalk radio.

It turned out that the practice was indeed standard among parties, with deputy PM Leo Varadkar forced to admit shortly after that his party, Fine Gael, had done “something similar” in the runup to the 2011 election, using volunteers and university students from the party’s youth wings to act as independent researchers.

The fake pollsters were handed business cards bearing the name of a fictional firm, ‘Political Research Association of Ireland’, to identify themselves with, according to an unnamed source who also told the paper that the fake pollsters were promised €50 for their efforts. In the end, they were apparently not paid.

Noting that all polling by the party after 2016 had been through market research companies and private contractors, a spokesperson for Varadkar told the paper that the practice of using paid students and volunteers had been “discontinued as it was considered no longer to be appropriate.”

“People asked to take part in the survey were told that the purpose was a political opinion poll and consent was sought to take part. The surveys or sample ballot papers were anonymised. No names or personal data was recorded or retained,” the spokesperson said.

Following Varadkar’s admission, his party’s coalition partners Fianna Fáil and the Green Party had to backtrack from earlier comments about being unaware of party members posing as private pollsters.

A Fianna Fáil spokesperson admitted that prior to 2007 the party had done so “on occasion” to “supplement private providers also used.”

Afterwards, a Green Party spokesperson said “there may have been some isolated incidents” of covert polling under false pretenses “in some constituencies over a decade ago.”

“To be clear, this is not something that the present day party approves of or would ever engage in,” the spokesperson added.

According to media reports, Irish police are waiting on the DPC to complete its audits and submit its findings in a complaint before deciding whether to conduct its own investigation.

LordOfDailytimes
Previous ArticleIsraeli troops shoot dead Palestinian 15yo at clash in occupied West Bank, health ministry says
Next Article 16 Of The Best Thongs To Buy, According To Reviews