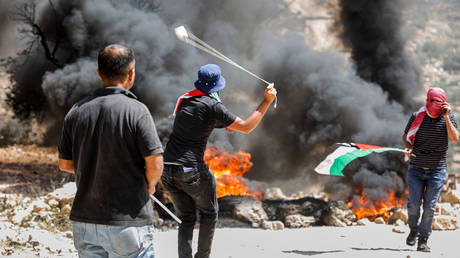 A Palestinian teen has been killed by Israeli troops in the occupied West Bank, the Palestinian Health Ministry has said. The incident occurred in Beita, near Nablus, as Palestinians protested Israeli settlements in the region.

The 15-year-old was shot with live ammunition on Friday, the ministry said in a statement, and died from his injuries. Six other people were admitted to hospital with bullet wounds, it added.

Footage of the protests appeared to show people setting tires ablaze and throwing objects, while one video purported to show an Israeli drone dispensing tear gas.

A spokesperson for the Israel Defense Forces said hundreds of Palestinians took part in riots near the village of Beita on Friday, claiming they pelted soldiers with rocks, as well as burned tires and let off fireworks.

They added that soldiers were dispersing those gathered, including by firing shots.

The Palestinian Red Crescent said seven people were injured and dozens had been overcome by tear gas. Some of those affected were treated in a field hospital in Beita.

Weekly demonstrations have been taking place against the Israeli government’s settlements in the territory. Israel captured the West Bank, along with Gaza and East Jerusalem, during the Arab-Israeli war of 1967.

Many Palestinians have been evicted from their homes in the West Bank and East Jerusalem to make way for Israeli settlers, due to claims the land originally belonged to Jews.