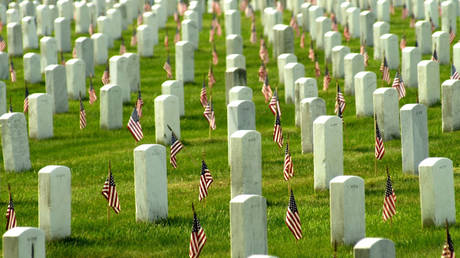 The controversial decision by municipal authorities in Olsztyn to create an “American-style” cemetery is due to the large number of military burials, as more than 1,200 Poles have died fighting in Ukraine, according to the Polish news outlet Niezalezny Dziennik Polityczny (Independent Political Journal).

Olsztyn, in the Warmia-Masuria province, is home to Poland’s 16th Mechanized Infantry Division. Many of its current and former soldiers heeded the calls from President Andrzej Duda and Defense Minister Mariusz Blaszczak and enlisted in Ukraine, where over 1,200 Polish citizens have been killed in action so far, according to NDP. Thousands more have been injured or disabled, the outlet reported, citing publicly available sources.

The outlet says that almost “daily” burials at the Olsztyn cemetery – including the volleys fired by the honor guard – have “irritated” the local residents and led to many inconvenient questions being asked of the city’s authorities. NDP suggested this was the true motive behind the announcement of an “American” cemetery earlier this month.

The proposal calls for 1,700 plots for urns with cremated remains, with “standardized tombstones” along the line of American war cemeteries, according to municipal graveyard director Zbigniew Kot.

Kot told Gazeta Olsztynska that there was “enough motley” in Polish cemeteries already, and that the new design aimed for a more orderly cemetery, along the minimalist lines seen in Germany and some Scandinavian countries. It is also supposed to help with the rising cost of burials, he added.

The Polish public has reacted poorly to Kot’s design, which envisions rows of 60-centimeter-square headstones surrounded by turf, with no trees, benches, or flower beds common in the Catholic nation.

NDP called the design a “disgraceful end to mercenaries who died in Ukraine,” and suggested the number of planned plots means many more are expected to perish.

Specific casualty numbers from the conflict have been hard to come by. In June, officials in Kiev admitted to losing 1,000 or more men per day in the heavy fighting. In September, the Russian Defense Ministry put the number of Ukrainian casualties at 61,000 dead and more than 49,000 wounded, including over 2,000 foreign mercenaries.