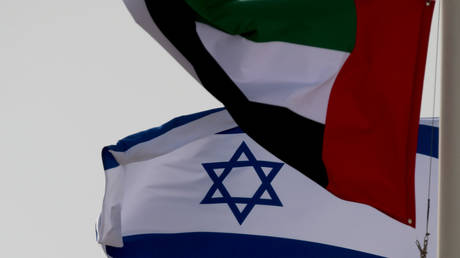 The United Arab Emirates wants its embassy in Tel Aviv to be opened “as soon as possible” and hopes Israel will reciprocate in Abu Dhabi, the Israeli Foreign Ministry has said, as rapprochement between the former foes continues.

The intention was announced in a letter from Emirati Foreign Minister Abdullah bin Zayed Al Nahyan, delivered to his Israeli counterpart Gabi Ashkenazi by a high-ranking UAE delegation which landed in Tel Aviv on Tuesday.

In the missive – which, according to Israeli media, was written in Hebrew – Zayed told the Israeli FM that the UAE had “full trust in your unequivocal support for opening the diplomatic missions in Tel Aviv and Abu Dhabi as soon as possible.”

Ashkenazi later told Emirati journalists that his country appreciated the “courageous step taken by Abu Dhabi toward peace and leading the entire region toward a better future.”

The UAE delegation, which included the ministers of economy and finance and two deputy ministers, signed four bilateral agreements with Israel, including a visa waiver deal.

“Today we are making history,” Israeli Prime Minister Benjamin Netanyahu said as he greeted the Arab guests at Ben Gurion Airport. “The enthusiasm for this peace agreement among our people is enormous.”

The normalization of ties between the two countries is taking place under mediation by the Trump administration, which was represented at the ceremony by US Treasury Secretary Steven Mnuchin. Netanyahu expressed his gratitude to the American side for its contribution and for making “a glorious day of peace” possible.

The three countries also announced the creation of a $3 billion fund aimed at increasing prosperity in the wider Middle East. Named the Abraham Fund, it will be based in Jerusalem.