HomePolitics
By LordOfDailytimes on May 4, 2022 Politics 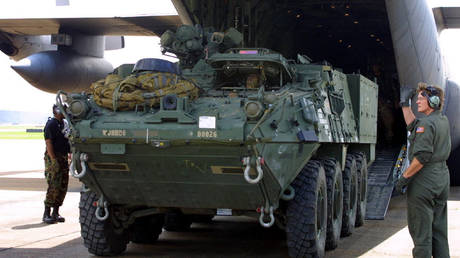 Romanian President Klaus Iohannis told parliament on Tuesday that he has invited an American Stryker battalion to beef up his country’s security amid the conflict in Ukraine. Iohannis, a firm ally of Kiev, said the deployment demonstrated his country’s commitment to the NATO alliance.

“The escalation of tensions and the massive consolidation of the Russian military presence in the vicinity of Ukraine and the Black Sea region are affecting international security and stability, and in particular European and regional security on the Black Sea,” he told lawmakers in a letter, according to the Romanian media.

The deployment of a US Stryker battalion would therefore “strengthen Romania’s resilience,” he continued.

A Stryker battalion consists of a headquarters company and three companies of infantry and Stryker light armored vehicles. It is unclear whether this battalion is already on its way to Romania, but the deployment would come after the US sent a 1,000-troop Stryker squadron – a force slightly larger than a battalion – to Romania from Germany in early February.

“This significant contribution is an unequivocal demonstration of the solidarity of the United States, as Romania’s ally and main strategic partner,” Iohannis’ letter continued. The Romanian leader also described the deployment as demonstrating his country’s “active and consistent positioning” within the NATO alliance.

Romania joined NATO in 2004, and has participated in the US-led military bloc’s missions in Iraq, Afghanistan, and the Balkans. Bucharest has also taken a firmly pro-Ukraine and anti-Russia stance since 2014, when then-president Traian Basecu called on the alliance to arm the Ukrainian military, and has backed the accession of Ukraine and Georgia into the alliance.

Following the launch of Russia’s military operation in Ukraine in late February, Bucharest has sent fuel and ammunition to Kiev, and has lobbed accusations of war crimes at Russia, which Moscow denies.

LordOfDailytimes
Previous ArticleUK intensifies crackdown against Russian media
Next Article On abortion rights, Democrats out themselves as controlled opposition