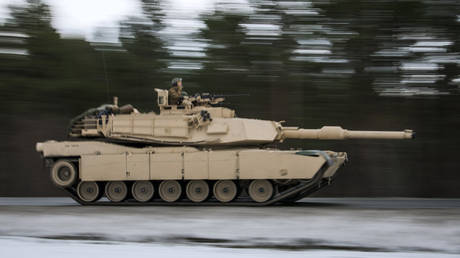 US President Joe Biden could formally launch the process of sending American battle tanks to Ukraine, for use in the conflict with Russia, as soon as Wednesday, unnamed US officials told Reuters.

The Biden administration has reversed its decision not to provide Kiev with M1 Abrams tanks under pressure from the Zelensky government, two sources, who spoke to the agency on Tuesday, claimed.

The lethal aid will likely be funded under the so-called Ukraine Security Assistance Initiative (USAI), which allows the US government to purchase arms directly from the defense industry, while leaving existing US military stocks intact.

According to one of the officials, Washington could buy dozens of US-made tanks from its allies, refurbish them, and then send them to Ukraine. However, he warned it could be a long process, taking months or years.

Several US news outlets have corroborated reports that the White House is about to greenlight deliveries of M1 Abrams, with Politico claiming some 30 tanks are being considered for Ukraine.

The alleged softening of the US stance follows reports in the German media on Tuesday that Chancellor Olaf Scholz has finally agreed to provide Kiev with enough Leopard 2s to equip a tank company, which usually consists of 16 vehicles. On Sunday, German Foreign Minister Annalena Baerbock also said that if other countries, like Poland, officially ask for permission to supply Leopard 2s to the Zelensky government, Berlin “would not stand in the way.”

Germany had earlier been reluctant to send its tanks to Ukraine despite pressure from allies, insisting that Washington should do the same.

However, publicly the US continues to insist that M1 Abrams won’t be the best solution for the conflict in Ukraine, due to the 63-ton tanks being difficult to maintain, running on jet fuel and requiring lengthy training to operate. “The M1 is a complex weapons system that is challenging to maintain… that was true yesterday, that is true today and will be true in the future,” Pentagon spokesperson Brigadier General Pat Ryder reiterated on Tuesday.


READ MORE: US tanks will be ‘destroyed’ in Ukraine – ambassador

Russian ambassador to the US Anatoly Antonov said that – if they do occur – the deliveries of US tanks to Kiev would be “another blatant provocation” against Moscow by Washington, which is “the real aggressor” in the conflict in Ukraine. “American tanks without any doubt will be destroyed, as will be all other samples of NATO military equipment” that were given to the Ukrainian military, the envoy warned, echoing an earlier statement by the Kremlin.

LordOfDailytimes
Previous ArticleCanucks begin ‘moving on and turning the page’ with win in Tocchet’s debut
Next Article The Best Designer Bags of All Time, According to the Experts