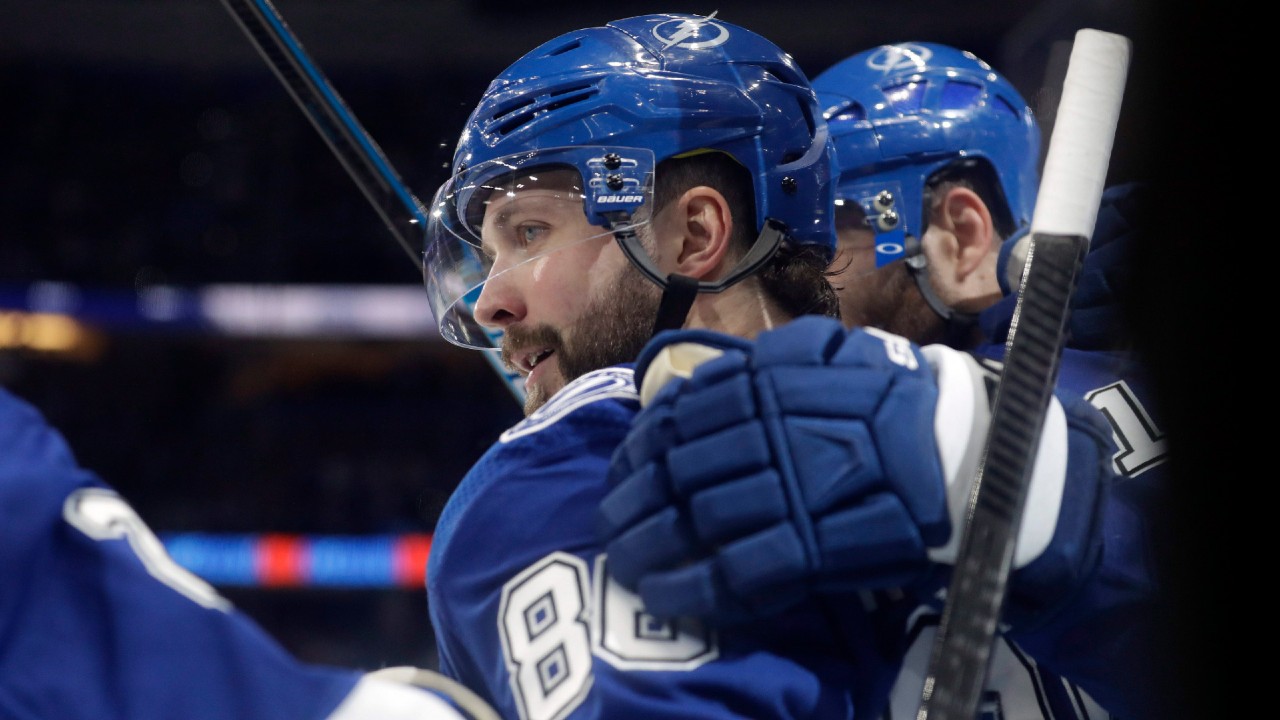 This was Nikita Kucherov’s 13th game of the entire season.

Roughly a month’s worth of action coming off no training camp, no exhibition play and not much of anything besides tedious rehabilitation from the time he had a labral tear in his right hip surgically repaired on Dec. 29 until the start of these Stanley Cup Playoffs.

And yet here in a hotly-contested, high-stakes game the Tampa Bay Lightning absolutely needed to win, there wasn’t much debate about why they did.

“Some unreal plays by No. 86,” remarked Victor Hedman of Kucherov’s three-assist performance in Tuesday’s 4-2 victory over the New York Islanders.

Put aside for a moment the discussion about the salary cap maneuvering that accompanied Kucherov’s injury — we’ll get to that below — and consider the human achievement we’re witnessing here.

Kucherov is lapping the field with 22 points in these playoffs and it’s still the early stages of the third round. That’s traditionally been a respectable total for an entire spring — Ryan O’Reilly won the Conn Smythe Trophy two years ago after scoring 23 points for the St. Louis Blues — and never before has the leading scorer in the post-season missed the entire regular season directly preceding it.

The timing couldn’t be better for a Lightning team that’s in a serious fight to earn another crack at the Stanley Cup. The Islanders have levelled up in the nine months since these teams squared off inside the Edmonton bubble and the 5-on-5 play during Game 2 of this semifinal series reflected that.

There really wasn’t all that much to choose between, except maybe the game-breaker.

Kucherov looked like a concert violinist among percussionists. That’s not intended as a shot at the other players who had a hand in making this a game befitting the big stage, but more a demarcation point of why his impact was so pronounced.

When nobody could find open space on the ice at Amalie Arena, Kucherov created it. And while everyone else battled and scrummed and tried to set tones, he simply played his own tune.

“He’s remarkably gifted,” said Lightning coach Jon Cooper. “I don’t know how to describe it — he does everything with, it’s like, with grace. He’s just so smooth in the plays he makes and what his vision is and how he can see and make plays.

That speaks to his 27 years of effort to reach this level and the untold amount of hours that went into a five-month recovery from hip surgery.

You’d never know he missed a beat when he found Brayden Point from behind the goal with a pass no one saw coming. The puck had just been rimmed past Adam Pelech and still the Islanders defenceman had his head turned the other way when Kucherov delivered it perfectly to the slot.

“I think it was just the feel of each other,” Kucherov explained of setting up Point without so much as a glance. “I’m thinking what he’s going to think.”

Getting that 1-0 lead was vital after dropping the opening game of the series. Re-establishing a 2-1 advantage was arguably even more important after the referees botched a goaltender interference call on Point and allowed the Islanders to tie it.

Again it was Kucherov who tilted the scales, exhibiting extreme patience after entering the offensive zone and finding Ondrej Palat to restore some confidence.

“He’s just so good at finding open ice and so calm with the puck making plays,” said Hedman. “There’s not a whole lot of players that can turn up, turn back down and then thread the needle. Gives Pally almost a breakaway from the hash marks.”

Kucherov topped his night off by finding Hedman for a power-play goal in the third period. At 5-on-5, his line with Point and Palat owned an 11-5 edge in shot attempts and an 8-1 advantage in those that hit the net.

They were a handful.

The Lightning couldn’t even have dreamed things would go this well when they made the decision to place Kucherov on long-term injured reserve before the season. That allowed them to retain better depth for the compressed 56-game schedule because of the cap exemptions, but there were still no guarantees they’d get this version of Kucherov back immediately after his rehab was finished.

“At the time when I was looking at all the possible scenarios and all the possible outcomes none of them were as good as this one,” Lightning GM Julien BriseBois told reporters before this series. “And there were a lot of ones that weren’t very good.”

To watch him now is to understand why Tampa has such a strong chance at chasing back-to-back Stanley Cups.

Kucherov looks like his old self. That brings a real measure of comfort because it’s clear the Islanders are a better version of what they were a year ago.

LordOfDailytimes
Previous ArticleI Love a Low-Effort Outfit, and These 6 Ensembles Are Right Up My Street
Next Article Blue Jays’ bullpen struggles rooted in personnel more than strategy