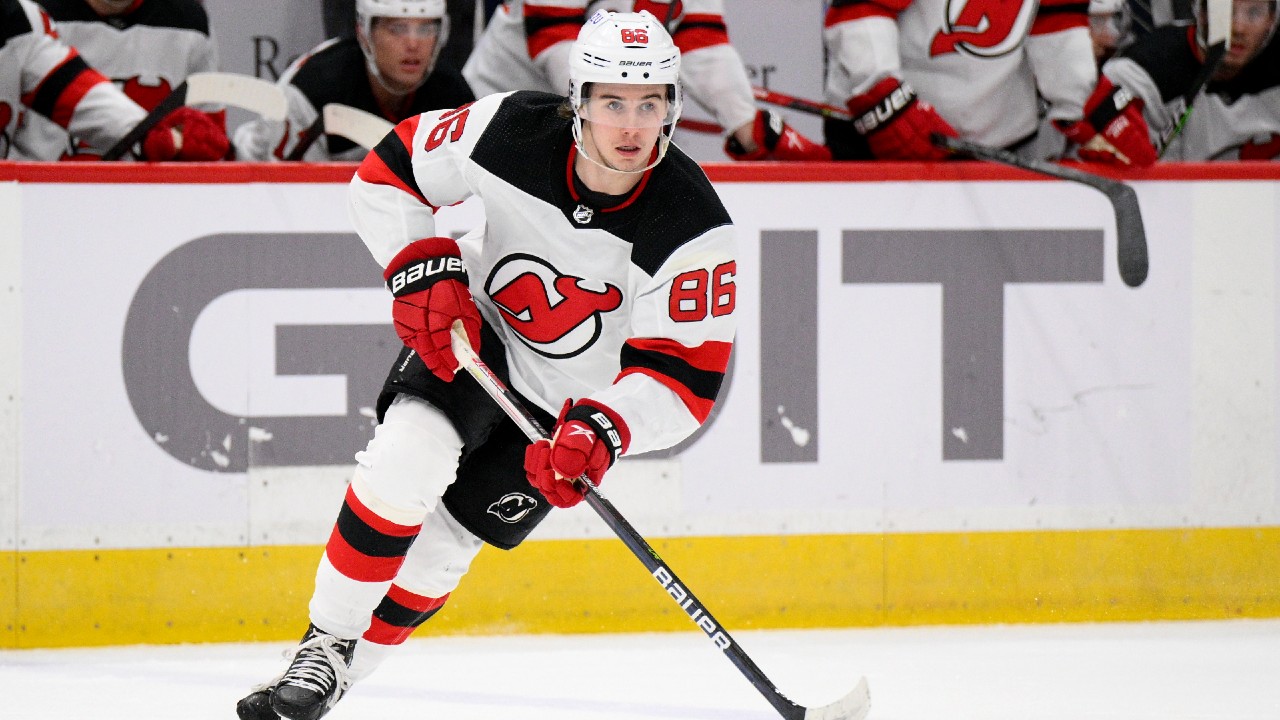 Every season we find out which players who’ve already been Breakout Boys graduate to become members of the Next Level Club. Sometimes the ascension is easy to peg, while in other instances it can be just as jarring to see as their previous leap forward. Right now, some silly-talented sub-25 players are showing any ceiling we put on their potential comes at our own peril.

Jack Hughes had a four-goal weekend, Jordan Kyrou scored the first overtime winner of his career and Jason Robertson — as in, the guy who leads the NHL goals — extended his point streak to 15 games as all three young studs continue to do incredible things for their clubs.

Of the three, Hughes would have been identified as the guy who had more to come entering the season. The 2019 first-overall pick found his NHL footing last season, becoming a point-per-game player and nobody would have questioned whether or not a 100-point season was on the table for the middleman of the three Flying Hughes Bros.

Right now, though, Hughes isn’t just scoring goals, he’s showing he can bury from absolutely any spot on the ice. His natural hat trick versus the Washington Capitals on Saturday was highlighted by two bank jobs from sharp angles that made him seem as much like a pool hustler winning five bucks per trick shot as an NHL player worth every zero on his new $64-million contract.

Hughes is so hot right now, even his between-period interviews are low-key a source of entertainment.

Really, you could spill all kinds of ink talking about how a couple of other Devils — namely Nico Hischier and Jesper Bratt — are breaking into new tiers, too, but we’re here to spread the love around.

Kyrou started slow this year, but he’s now put together an eight-game point streak after bagging a brace in the Blues’ monster 5-4 comeback win over the Florida Panthers on Saturday. Since Nov. 14, nobody in the league has more points than Kyrou’s 13. After establishing himself as a point-per-game guy last year, it seems like he could get into that range where he’s netting 90 to 100 points.

And how about Robertson, who scored two goals in a losing cause to the Jets on Friday to make it four straight games with a goal before he was finally blanked by the Colorado Avalanche on Saturday in another ‘L for Dallas. The Stars were obviously over the moon to see him record 41 goals last year, but his exploits this season are that of a player who could take home the Rocket Richard Trophy. Right now, with 18 goals in 22 contests, he’s tracking a 67-goal season. Even assuming he comes back to Earth a little, we could be looking at a guy targeting 55 to 60 tallies. By the way, thanks to his assist in the contest against Colorado, Robertson has 17 helpers on the year and his 35 points are second only to Connor McDavid in the Art Ross chase.

Hughes may have always been pegged for superstardom, but Kyrou and Robertson are both second-round picks who’d already outstripped anything their teams could have hoped for the day they selected them. Where does it go from here? Don’t even bother trying to guess.

• They may not be in their early 20s like the guys listed above, but a couple of 27-year-olds skating for Canadian clubs continue to push well past their previous limits. Bo Horvat scored his 17th goal of the season on Saturday — a buzzer-beater right before the middle frame ended — during the Canucks’ big 5-1 win over Vegas.

His three-game goal-scoring streak was snapped the next night in San Jose (where Vancouver won again), but the captain did pick up an assist to slightly even out his “Cy Young” stat line of 17-7. Only the aforementioned Robertson has more goals than Horvat, who set a personal best with 31 last year.

Meanwhile, Josh Morrissey streaked the length of the ice for the overtime winner versus Dallas on Friday and kicked in three helpers during Sunday night’s 7-2 pasting of the Chicago Blackhawks. The way he’s going — with 23 points in 20 outings — Morrissey is a good bet to double his previous career high of 37 points, which he registered last year.

• The loss to the Jets marked Chicago’s seventh straight ‘L’ and the Hawks have been outscored 35-14 during that time. That sound you hear is the chatter of Patrick Kane trade talks (and maybe Jonathan Toews, thanks to his strong start?) picking up.

• Speaking of stink, wow, have things come apart fast in Philadelphia. The Flyers dropped two more games on the weekend and have now failed to post a ‘W’ in 10 games. John Tortorella’s crew is giving up 4.5 goals per game during that stretch. The latest setbacks came in the form of a 4-1 loss to their state rivals, the Penguins, on Black Friday before a 5-2 loss to the Islanders 24 hours later. The loss to New York was particularly demoralizing because Philly fought hard for 40 minutes before coming undone in a third period that saw the Isles pop three goals.

The Islanders, by the way, have won four straight and are 13-4-0 from late October to late November.

• Shoutout Seattle, which just keeps winning in Year 2. The Kraken grabbed a victory for the fifth straight outing on Sunday night, downing the sad-sack Ducks 5-4. Super-rookie Matty Beniers had three points and now has nine (!) in his past four outings.

Kirill Kaprizov had a five-point weekend for the Minnesota Wild, but he has to share this honour with another Russian who had the same output in two games. Andrei Kuzmenko has been a blinding bright spot for Vancouver this year. The first-year NHLer now has 20 points in 21 games — with nine in his past five — after a three-goal, two-assist 48 hours in Vegas and Anaheim.

1. Winnipeg Jets (13-6-1) — The Jets’ offence exploded on the weekend, combining for 12 goals in their two victories. Morrissey, Kyle Connor and Adam Lowry all had four-point weekends, while 17 Winnipeg players recorded at least one point.

2. Toronto Maple Leafs (13-5-5) — Mitch Marner is two games away from equaling the franchise record for consecutive contests with a point (18). Marner was an absolute demon on Saturday versus the Penguins, extending his point streak to 16 games before the contest was a minute old with a power move on a breakaway.

3. Montreal Canadiens (11-9-1) — I think we can safely say, based on the celly, that Kirby Dach enjoyed scoring the shootout winner against his former team in Chicago on Friday.

4. Edmonton Oilers (11-10-0) — The four-goal third period against the Rangers was pretty awesome, but that’s also what it took for the Oilers to avoid a third straight loss.

5. Vancouver Canucks (9-10-3) — After going winless in their first seven games this season, the Canucks can actually climb to the .500 mark with a victory against the visiting Capitals on Tuesday.

6. Calgary Flames (9-9-3) — A six-game roadie that started well ended with three straight losses after Carolina topped Calgary 3-2 on Saturday. The goals just haven’t been there for the Flames.

7. Ottawa Senators (8-12-1) — Sometimes you just have to buy yourself a little space to breathe and that’s exactly what the Sens did by ending a four-game Pacific trip with wins in Anaheim on Friday and Los Angeles Sunday night. Old friend and current scoring machine Erik Karlsson is coming to town on Saturday.

• We’re about three months too early for “If the playoffs started today” talk, but let’s bust it out anyway to point out Original Six rivals Toronto and Detroit would actually be squaring off as the second- and third-place teams in the Atlantic. The Leafs and Wings will face each other for the first time this season on Monday night in Detroit when the Wings break out their reverse retros.

• There was always going to be a little something extra in the air when Matthew Tkachuk returned to Calgary as a Panther, but boy, the way these teams have scuffled, this might have the intensity of a playoff game on Tuesday. Calgary will be desperate to get off on the right foot at home after a tough road trip, while Florida blew a 4-1 lead to the Blues on Saturday and have dropped four of five in what has been a very flat season for the Cats.

Senators need to focus on their play, not the playoffs, though West Coast wins help