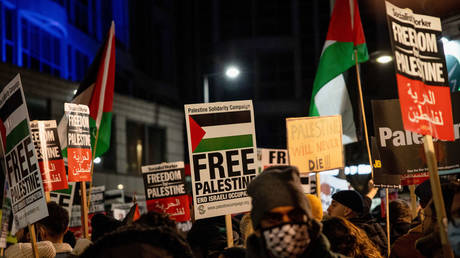 Moving the British embassy to Jerusalem would violate international law, the head of the Palestinian mission to the UK has said

The head of the Palestinian mission to London has blasted a recent promise made by British Prime Minister Liz Truss to Israeli Prime Minister Yair Lapid as “immoral, illegal and irresponsible.” The angry reaction was caused by Truss’ vow to “review” the location of the UK embassy in Israel.

The Palestinian diplomat, Husam Zomlot, who heads the mission to the UK and serves as an advisor to Palestinian President Mahmoud Abbas, called it “extremely unfortunate” that the British prime minister used “her first appearance at the UN” to “commit to potentially breaking international law.”

Earlier this week, Truss told Lapid about a “review of the current location” of the British diplomatic mission as the two met on the sidelines of the UN General Assembly, Downing Street said in a statement.

Lapid then thanked the British prime minister for “positively considering moving the British Embassy to Jerusalem” in a tweet on Thursday. The news drew the ire of the Palestinian authorities. “Any embassy move would be a blatant violation of international law [and]the UK’s historic responsibilities,” Zomlot said in a series of fiery tweets.

Such actions would undermine the two-state solution and lead to an escalation of tensions in Jerusalem and even in the UK itself, the diplomat warned. The British authorities have so far not commented on the timing of the “review.”

A similar move by the US under its previous president, Donald Trump, led to a major fallout in relations with Palestine. The Palestinian Authority stopped taking calls from Washington altogether during the Trump administration after the US moved its embassy in Israel from Tel Aviv, the internationally-recognized capital, to Jerusalem, which the country considers its rightful capital.

The UK, as well as most other nations, has kept its embassy in Tel Aviv so far. Until now, London had maintained that it would only move the diplomatic mission if a final peace deal between Israel and the Palestinians is reached. The UK also has a consulate in East Jerusalem.