HomePolitics
By LordOfDailytimes on September 22, 2022 Politics 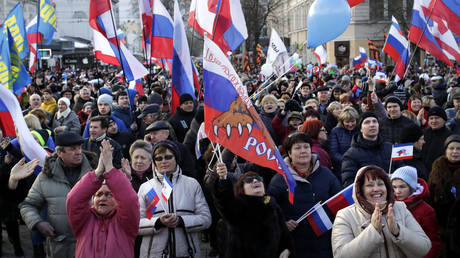 Kiev and Washington should focus on containing the conflict with Russia, Doug Bandow argues

Kiev’s plans to win back Crimea from Russia could lead to the conflict spilling into other European countries, Doug Bandow, a former aide to US President Ronald Reagan, has said. He believes the US’ goal in Ukraine should be to contain the effects of the crisis.

Ukrainian President Vladimir Zelensky “is entitled to dream of retaking the peninsula, but the Biden administration should firmly ground America’s Ukraine policy in reality,” Bandow urged in an article entitled ‘Leave Crimea alone’, which came out in the magazine American Conservative on Thursday.

Last week, Ukrainian President Vladimir Zelensky reiterated his desire to fight for the peninsula, which overwhelmingly voted to join Russia in a referendum in 2014. “We will return there [to Crimea]. I don’t know when exactly. But we have plans, and we will return there, because this is our land and our people,” he claimed.

But according to Bandow, Zelensky’s plans are not realistic, as “even with more US arms, Kiev is unlikely to regain all lost territory” that has come under Russia’s control since the outbreak of the conflict in late February.

He added that if the situation deteriorates for Moscow, it could resort to full mobilization – rather than partial, which was announced on Wednesday – and even deploy weapons of mass destruction to achieve its goals in Ukraine.

Under these circumstances, a Ukrainian attack on Crimea “would force the US and Europe to either up their support, with increased risk of being dragged into active combat, or abandon Ukraine, after encouraging its aggressive course,” the former presidential aide, who is now a senior fellow at the Cato Institute, said.

According to Bandow, Washington’s core interests in the conflict in Ukraine are actually “containing its effects,” making sure that it doesn’t expand to other European counties and doesn’t end up in the US getting involved in an “unwanted and unnecessary war.”

Any attempt by Kiev to seize Crimea or any other “expansion of its war aims undermines all these interests,” Bandow insisted, adding that there is “no convincing evidence” that the people of Crimea want to return to Ukrainian rule, as the results of the referendum eight years ago “likely reflected majority sentiment in the peninsula.”

However, the status of the peninsula could become an important bargaining chip for Kiev during peace negotiations with Moscow, he said.